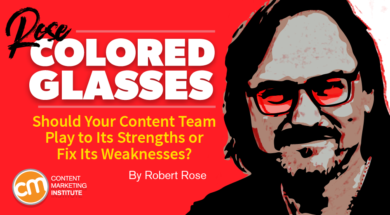 Do you know your own strength? What about your weaknesses?

One business management and leadership theory suggests that people and teams will achieve more success by building on their strengths than by trying to fix their weaknesses.

The theory doesn’t mean you should ignore weaknesses. Instead, it suggests you should invest deeply in talents and strengths and minimize the effects of any weaknesses. (You can read more about it in the book Strengths Based Leadership, based on the Gallup organization’s 30-year research project.

I’m all in on this idea. I’ve seen this idea work for content teams that achieve success over the long term. But the choice isn’t always clear.

Should #ContentMarketing teams double down on their strengths? Or try to fix their weaknesses? It’s not an easy choice, says @Robert_Rose via @CMIContent. Click To Tweet

A new content marketing strategy brings people together under new charters, with new processes, responsibilities, and technologies. People call this process of getting everyone ready for the new situation “change management.”

But, if we’re honest, it’s really “new management.” None of this stuff has been done before.

One of the first things I recommend to clients in this situation is to do a skills audit. A skills audit finds areas of strength as well as gaps where additional training, outsourcing, or new hires might be needed.

I’ve seen many companies make the same mistake after the skills audit: They double down on shoring up perceived (or actual) weaknesses.

But that approach immediately builds a steep mountain to climb. Content teams grappling with all the “new” may feel demoralized if they have to hire and train new in-house or outsourced staff at the same time.

Yet many experts argue that focusing solely on strengths has its pitfalls. Several years ago, a Harvard Business Review podcast suggested that “so many weaknesses are overdeveloped strengths.”

For example, amplifying a politically astute team leader’s strengths can create a manipulative boss. Focusing on the speed or creativity of the in-house design team can lead to a team that’s overworked and considered idiosyncratic in their approach or out of touch with business realities.

Deciding whether to focus on the strengths or weaknesses uncovered in a skills audit reminds me of the aphorism usually attributed to statistician George Box: “All models are wrong, but some are useful.”

There are no easy answers.

Which strengths and which weaknesses matter more

For example, companies building content teams often ask me, “Should we hire subject matter experts with deep knowledge about our services and industry or great writers who can learn our business over time?”

The answer to that question is yes.

Both approaches are equally important – until you figure out which will impact the team’s objectives more. Once you decide which is more important, you can focus on enhancing the strengths of the approach you’ve chosen.

The first involved a new content team at a large Fortune 100 company. After conducting a skills audit, they identified their strengths: creativity and journalistic storytelling. They also uncovered some perceived weaknesses: sales-enablement content and marketing measurement.

As a new team, they also understood that the business placed a high value on the ability to feed great content to sales and provide analytics to show the content’s effectiveness. A key piece of the team’s business case was centralizing content and making it an internal strength. So, their impulse was to shore up their sales content and analytics weaknesses.

To do so, the content team took over these areas from their outsourced agency. They were sure they could “figure it out.”

But they didn’t. And the team’s reputation as a strong editorial team also took a hit as they tried to balance their strengths with the lack of marketing and analytical ability. When the business pivoted, they let the editorial team go. They weren’t considered capable of taking on the necessary marketing analytics.

Would they have survived if they’d let the agency handle their weak areas and continued to excel at editorial or built a phased partnership with the agency to address the skills needed for sales enablement and measurement?

In the second situation, a technology company I work with had been growing and molding its content team for a few years. They maintain an acute awareness of their team’s strengths and weaknesses. More importantly, the team leader has created transparency and understanding of their ongoing balance throughout the business.

At first, they focused on highlighting their strengths as a content marketing team (creativity, industry thought leadership, and structuring content for translation and reuse). They didn’t initially take on sales-oriented content – they left it to the demand generation team.

Eventually, they partnered with the demand-gen team, which continued to create great marketing content. The content team helped them develop standards and playbooks to facilitate translation and repackaging for multiple channels.

Years in, this model works very well for them.

The usefulness of any content skills audit lies in the ability to align the team’s core strengths to the priorities and skills of the business.

Over time, if you can keep this awareness, your team’s weaknesses can become its greatest strength.

It’s your story. Tell it well.

Subscribe to workday or weekly CMI emails to get Rose-Colored Glasses in your inbox each week.